‎Hockey‬ fever is catching up in ‪‎Bhubaneswar‬. Men’s Hockey Champions Trophy, 2014 going to be played at ‪Kalinga Stadium‬ from 6th to 14th December 2014.

The practice turf is located close to the Jayadev Vihar – Kalinga Stadium main road and you can easily peep through the boundary and gate to see players in action.

http://www.ticketgenie.in/ is the official site to buy tickets. Ticket price vary from Rs 20 to Rs. 100 for 2-match, half day session during the group stages.

You can checkout HockeyIndia’s official site for complete tournament schedule and more details.

6th December, 2014: 2014 Men’s Hockey Champions Trophy kicks off at Kalinga Stadium. This is what going to rock Bhubaneswar for next 10 days.  Pic Courtesy: Hockey India.

13th December, 2014: Its ‪‎India‬ vs. ‪‎Pakistan‬ in the semifinals of 2014 Men’s Hockey Champions Trophy on 13th December. #CheerForIndia. 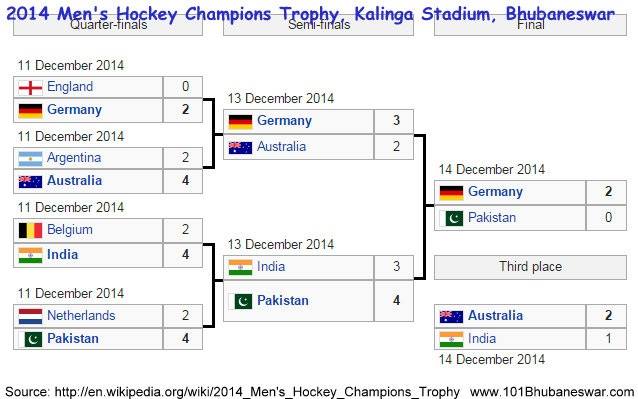 Total of 24 matches were played in 9 days. Preparedness and execution by the organizers Hockey India and Govt of Odisha was phenomenal. Gallery full 7000+ active audience witnessed every single match cheering the players of both side throughout the game.